Decades of mining in the Witwatersrand basin has created an enormous, interconnected, subterranean void from Randfontein in the west to Nigel in the east, in some places as deep as 3 000 metres. During mining operations, water is constantly pumped from the mine to prevent flooding, but when the mine is abandoned or closed, pumping ceases and the voids start filling with groundwater.

Metal sulphides (pyrites) oxidise when the ore is exposed to water and oxygen, generating sulphuric acid, which leaches minerals such as iron, arsenic and cadmium from the ore body.  The chemical oxidation reactions deplete the water of oxygen, making it uninhabitable for aquatic life.

The contaminated underground mine water is referred to as acid mine drainage (AMD), and when the AMD decants to the surface, it may pose a risk to the ecological environment due to its low pH, dissolved mineral content and depleted oxygen levels. 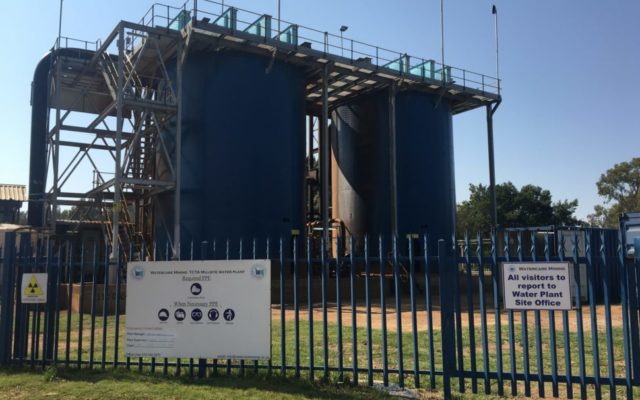 Watercare Mining recognised the benefits of a new and unique clarifier design in optimising the process to treat acid mine drainage at Tweelopiespruit.

Developing a solution to treat acid mine drainage

In a 2010 incident, AMD decanted to the surface on the West Rand, polluting the Tweelopiespruit, which ultimately flows into Hartebeespoort Dam. At this point, the government-owned, bulk raw water infrastructure company, Trans-Caledon Tunnel Authority (TCTA), was mandated to effectively stop the decant of AMD on the West Rand and in the Central and Eastern Basins.

Watercare Mining, an industrial water treatment company specialising in, amongst others, clarifier design and operations, was a service provider to the mine at the time. It partnered with the existing, operational mine in the Western Basin to develop a solution for treating acid mine drainage. This meant effectively stopping the decant of AMD to the surface.

Watercare Mining recognised the benefits of a new and unique clarifier design in optimising the process to treat acid mine drainage. Their patented High-rate Clarifier was designed for effective solid liquid separation at the volume and flow rate provided by the AMD pumping station, all within a drastically reduced footprint. 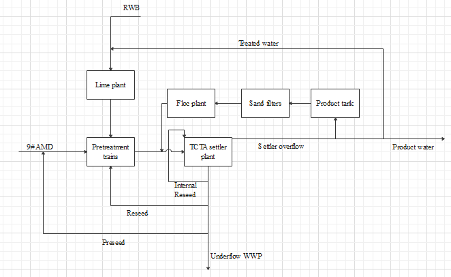 A two-phase treatment process was developed to achieve the objectives of treating the acid mine drainage to standards acceptable for release back into the natural waterway while maintaining the volume of AMD in the underground dam at specified levels (Figure 1).

The first phase aerates, and neutralises the AMD. Underflow from the High-rate Clarifier (Phase 2) is fed to the aerated and neutralised AMD to “seed” the suspended solids, increasing the size and density of the suspension in preparation for the second phase of the process.

The product flowing from Phase 1 is called High Density Sludge (HDS). HDS forms the feed to the High-rate Clarifier at the TCTA plant, Phase 2.

In Phase 2, the HDS enters the patented technology High-rate Clarifier. The neutralised, seeded suspended solids are settled and removed during this phase. The quality of the clean water overflow is acceptable for release into the Tweelopiespruit (less than 10ppm total suspended solids), while the sludge is either sent back to the HDS plant (Phase 1), or to a designated waste pit.

Conserving the natural biodiversity of the water system

Watercare Mining’s installation at TCTA consists of two 7.6 metre diameter High-rate Clarifiers. The plant is designed for a total volume inflow of 1520m3/hour or 36.5 Ml/day. The rise rate achieved is as high as 25,4 m/hr. Inlet total suspended solids is typically 3000 ppm, and the overflow total suspended solids ranges between 5-20 ppm.

The successful treatment and management of AMD at the TCTA plant have ensured the conservation of the natural biodiversity of the Tweelopiespruit water system.

Watercare Mining’s technical expertise was key in the optimisation of the processes required to treat the AMD to the standards required for release to the natural water system, and their patented High-rate Clarifier has been instrumental in the continuous and consistent treatment of the high volumes of AMD.

Our experts are ready to discuss water treatment solutions with you

Complete the form below and we will contact you.